MAN presented a wide range of innovations from the trucks, buses, engines and services areas at the IAA Commercial Vehicles fair in Hanover. The highlight was the new TG family of vehicles, which are virtually pollutant-free to drive. MAN showcased new technologies for cleaner and more efficient shipping at the SMM shipping fair in Hamburg.

The new MAN TG family of trucks celebrated their world premiere at the IAA Commercial Vehicles fair in Hanover in September 2012. They already meet the requirements of the future Euro 6 emission standard and offer powerful performance combined with low fuel consumption, excellent dynamic handling and a high level of driving comfort. The Munich-based commercial vehicles manufacturer and engineering company also showcased its efficient MAN Concept S truck study plus a matching aerodynamic trailer at the IAA. This cuts fuel consumption and emissions by up to 25% for the same load capacity. Also in September 2012, MAN showcased technical innovations to increase efficiency and reduce emissions for marine propulsion units at the SMM fair in Hamburg, the world’s most important shipbuilding trade show. 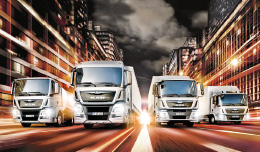 The key figures presented in this chapter comprise the Trucks and Buses, Power Engineering and Financial Services businesses. The prior-year figures relate to the period since MAN was consolidated, i.e. from November 9, 2011.

The MAN brand’s deliveries to customers amounted to 134 thousand trucks and buses in fiscal 2012. The sovereign debt crisis in Western Europe had a negative impact, while the introduction of the new Euro 5 emission standard put a damper on demand in the key Brazilian market. The sales figures for the MAN brand include 15 thousand buses.

The MAN brand produced 124 thousand commercial vehicles in the reporting period, 16 thousand of which were buses. The company adjusted its production to match the decline in demand.

ORDERS RECEIVED FOR COMMERCIAL VEHICLES IN 2012

MAN was faced with a difficult economic environment for the commercial vehicles industry in fiscal year 2012. The brand generated sales revenue of €16.0 billion, roughly a quarter of which was attributable to the Power Engineering segment. Operating profit amounted to €808 million; the operating return on sales was 5.0%.