Swedish truck manufacturer Scania presented its wide range of Euro 6 engines for trucks and buses at the IAA Commercial Vehicles fair in 2012. Scania demonstrated opportunities for fuel efficiency with individual transport solutions for a very wide range of uses and enhanced assistance systems. 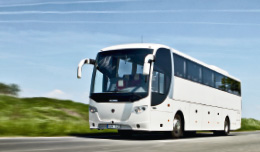 The slump in demand in the European truck markets had a negative impact on the Scania brand in fiscal year 2012, which sells almost half of all its vehicles there. The Swedish commercial vehicles manufacturer’s global deliveries to customers were down 15.9% to 67 thousand vehicles. Demand in the Western European (–13.9%) and South American (–14.7%) markets declined noticeably compared with the previous year. Bus deliveries were 20.5% lower year-on-year, at six thousand. By contrast, the service and genuine parts business performed well.

The Scania brand produced 67 thousand vehicles in 2012, 20.4% fewer than in the previous year. This figure includes the number of buses produced (six thousand). Scania started to build a new

CKD plant in Narasapura in India, which is scheduled to start assembling trucks and buses for the Indian market in 2013.

Declining volumes led to a 7.4% reduction in the Scania brand’s sales revenue to €9.3 billion. Operating profit declined by €442 million to €930 million. This was due to increased competition, lower capacity utilization and increased costs as well as lower volumes. The operating return on sales was 10.0%, compared with 13.6% in the previous year.