Volkswagen Commercial Vehicles presented its wide range of models at the IAA Commercial Vehicles 2012 under the motto “Diversity for every job”. The focus was on its BlueMotion and all-wheel drive technology, as well as the large number of upgrade and modification options.

Volkswagen Commercial Vehicles celebrated the start of production of the Amarok at the brand’s main production facility in Hanover in the reporting period. Adding Hanover as a second production location for the Amarok will significantly improve availability and delivery times for customers in Europe. The brand also celebrated the 65th and 30th anniversaries of the Transporter and the Caddy. Volkswagen Commercial Vehicles showcased its large range of vehicles at the IAA Commercial Vehicles fair in Hanover in September 2012. It also debuted two new special models. One was the Amarok Canyon – a high-quality off-road vehicle that again highlights the brand’s all-wheel drive technology. The other was the Cross Caddy with its individualized exterior design, which expands the range of Volkswagen Cross models. 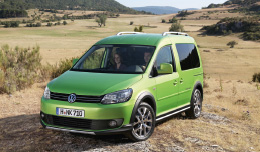 Unit sales to the dealer organization decreased slightly by 0.8% year-on-year to 437 thousand vehicles in fiscal 2012. The Amarok was particularly popular, while demand for the Crafter and Multivan/Transporter series also increased.

The Volkswagen Commercial Vehicles brand produced 487 thousand vehicles in the reporting period, 4.1% fewer than in the previous year. The Crafter is not included in these figures as it is produced in the Daimler plants in Düsseldorf and Ludwigsfelde. The main production facility in Hanover increased the number of Caravelle/Multivan, Transporter and Amarok models produced to 150 thousand (144 thousand) units.

Volkswagen Commercial Vehicles increased its sales revenue by 5.2% year-on-year to €9.5 billion. Operating profit amounted to €421 million (€449 million). The operating return on sales decreased from 5.0% in the previous year to 4.5%.