The Volkswagen Passenger Cars brand unveiled the seventh generation of its bestseller – the new Golf – in fiscal year 2012. The eco up!, which was also launched on the market, took pole position in Verkehrsclub Deutschland’s environmental vehicle list. Despite the challenging environment, the brand achieved a new sales record.

The most important event for the Volkswagen Passenger Cars brand in fiscal year 2012 was the market launch of the seventh generation of the Golf. The new model is considerably lighter than its predecessor, despite being slightly larger and better equipped. A large number of assistance systems for greater comfort and safety round off the package. The brand also started selling the natural gas-fueled eco up!. Its low consumption levels and CO2 emissions make it the overall 2012/2013 winner in the environmental vehicle list published by Verkehrsclub Deutschland (VCD), the German association for sustainable mobility. In addition, the third generation of the Beetle Convertible celebrated its world premiere at the end of the year. 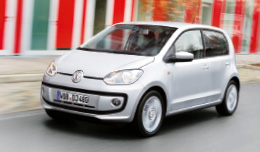 Unit sales by the Volkswagen Passenger Cars brand were up 9.0% year-on-year to 4.9 million vehicles in the reporting period. There was strong demand in particular for the Touareg, Tiguan, Golf Cabriolet and Fox models, as well as for the US version of the Passat. The new Golf, up! and Beetle models also met with a positive market reception.

The difference between deliveries and unit sales is primarily due to the fact that the vehicle-producing joint ventures in China are not counted as Volkswagen Passenger Cars brand companies.

The Volkswagen Passenger Cars brand increased its production by 9.5% to 5.8 million vehicles in fiscal year 2012; apart from the new production facilities, the plants in Mexico and Slovakia recorded the highest growth rates.

SEVENTH GENERATION OF THE GOLF

The Volkswagen Passenger Cars brand generated sales revenue of €103.9 billion in fiscal 2012, an increase of 9.8% year-on-year that was due mainly to increased volumes. Operating profit amounted to €3.6 billion (€3.8 billion). It was impacted by upfront expenditures for the

Modular Transverse Toolkit and startup costs for the new Golf. The operating return on sales was 3.5% (4.0%).

Our success in 2012 has allowed us to make further significant progress towards achieving our Strategy 2018 objectives, i.e. to increase worldwide sales to 6.6 million vehicles per year in approximately six years and to lift our global market share to 9%.