Can you measure corporate culture? You can certainly feel it. Like at Scania in Södertälje, Sweden, where the commercial vehicle producer’s remarkably open atmosphere is based on its employees’ motivation and wealth of ideas. An insight into an extraordinary workplace.

Elin Engström puts on her thick jacket and lined gloves. It is cold in Södertälje, half an hour’s drive from Stockholm in Sweden. The 22-year-old is a truck driver for the “transport laboratory” at Scania’s headquarters. The young woman works in a team with four other colleagues responsible for delivering goods to the Swedish truck and bus manufacturer’s European plants. She also tests out new technologies in real working conditions along the way. “We try out a lot here”, says Engström, “sometimes it’s a new driver assistance system, sometimes it’s new technology to reduce fuel consumption. Or fleet management systems, which our customers use to maximize the capacity utilization of their vehicles.”

Before working at Scania, Elin Engström hauled dangerous goods. “It’s not easy to be taken seriously as a woman in the transportation industry. That’s not an issue at Scania. My colleagues accepted and supported me from the start.”

The small team regularly analyzes the results of their trips together with the development department. “Our suggestions are welcomed – and are incorporated into the development of new vehicles and services.”

Engström is one of 35,000 employees worldwide who benefit from Scania’s exceptional corporate culture. One of the company’s three core values is “respect for the individual”. This is not just written on large boards all around the facility – it is tangible. “Our employees are the basis for the success of our company. That’s why we invest in their expertise and in a positive working environment”, says Kent Conradson, Head of Human Resources. “Scania stands for flat hierarchies, a great deal of teamwork and a vibrant, open culture of dialog. Perhaps this is typically Swedish. In any case, it ensures that we have a highly motivated team.” 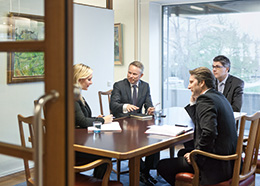 “Our employees are the basis for the success of our company. That’s why we invest in their expertise and in a positive working environment.” 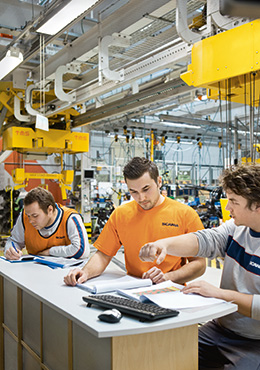 A glimpse into Conradson’s office is all it takes to reveal that some things are different at Scania. The 54-year-old shares the open-plan office with parquet flooring and oil paintings on the wall with his seven executive board colleagues. Conradson, who started at Scania 33 years ago as a young engineer, speaks much of the “cooperative leadership” in his company: “We want every employee to take responsibility, concentrate on the details and at the same time, understand the big picture. Everyone should focus on the here and now, but also have the future of the company in sight.”

While “soft” factors are a key emphasis at Scania, the company has also developed tools to measure well-being such as the SHE – or safety, health and environment – standard. Scania collects and analyzes key figures on attendance or employee turnover. This data is used to understand the causes of absence from work or for changing to a different employer, and to identify improvements. Conradson is proud of what has been achieved so far. “We have a high attendance rate, for example, with workplace attendance surpassing 96 percent, and a high level of loyalty to the company – the average length of service is currently twelve years.”

Production is dominated by the spirit of lean manufacturing. The Scania production system tracks the ongoing improvement of products and processes. “It’s important to get to the root of problems”, says Conradson. “That is the only way we can eliminate them.” You need dedicated, motivated employees for this, explains the Head of Human Resources.

One of them is Daniel Dyrenius. The 22-year-old is responsible for a team of four in assembly that mounts attachment brackets onto truck frames. “Functional inspectors should not be the first to notice discrepancies. Our goal is to keep on getting better by discovering these ourselves”, says the young man in the orange Scania T-shirt. Workflow standards are not just dictated by production engineers. “We discuss these in our team meetings and fine-tune them ourselves. The company has a lot of faith and confidence in us”, explains Dyrenius. He brings a folder out of the cupboard that illustrates each step of the process. “This shows why we mount components in this particular way. We as a team are reminded what we are doing and why – time and again.” 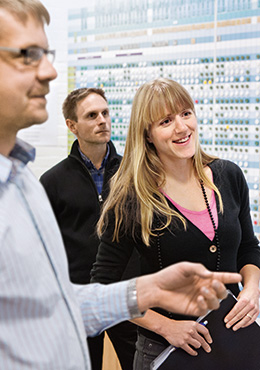 Dyrenius completed his technical school-leaving certificate at the company’s own college. His brother also works at the Södertälje plant. “Scania is a good, secure employer”, says the young man on the reason for his choice. In the evening, he attends continuing professional development courses offered by the commercial vehicle producer for particularly committed employees.

Scania supports its employees, encourages exchange between all staff levels, and offers a wide choice of career paths. Anna Pernestål is a good example of this. The 34-year-old was named “Technical Woman of the Year 2011” – a prestigious award for female Swedish engineers. She started at Scania as a trainee after university, writing her diploma thesis with the support of the company. Today, the physical engineer works in customer service on ideas to further improve workshops and their diagnostic instruments and repair equipment.

Pernestål is responsible for “preventive maintenance”. “Starter batteries only used to be changed when they failed. This often meant longer downtimes. Now, we make sure that trucks stay on the road with well-timed maintenance intervals. Our ideas help the customer save money.”

The young engineer talks of the increasing complexity of tasks in the transportation sector, rising cost pressures and growing vehicle fleets. She finds the transportation industry fascinating, and not just from a technical point of view. “Environmentally compatible mobility and transportation are becoming more and more important in a global world. Providing the right equipment for our customers to achieve this is motivating.”

Anna Pernestål, Elin Engström and Daniel Dyrenius work in different areas on completely different tasks. Yet they all say the same thing independently of each other: “Here, we always have the feeling that anyone can get ahead if they want to.” Typically Scania.