Every Porsche carries the lightweight gene. This applies equally to the 550 Spyder, the forerunner of all Porsche racing cars, and the new Boxster. Both feature a pioneering steel/aluminum mixed construction for a lightness previously unheard of in the automotive industry. 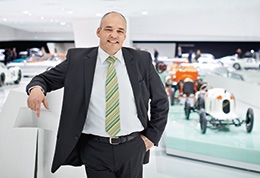 “These days, our engineers still put a great deal of thought into how we can shed extra pounds in each new model generation.”

At first glance, it was a David and Goliath-style battle. Umberto Maglioli took to the starting line in 1956 in a Porsche 550 Spyder, powered by a four-cylinder boxer engine with a capacity of only 1.5 liters, contesting the apparent superiority of eight and twelve-cylinder engines. The Italian won the “Targa Florio” long-distance road race in Sicily at the first attempt – Porsche’s first major motor sport success. The secret? The car weighed little more than 500 kilos. Less weight to move meant that a small engine sufficed – and mounting it in the center ensured that the weight was evenly distributed between the front and back axles. Porsche engineers had reworked the already light model 550 in the run-up to the race, cladding the three-dimensional tubular frame with the kind of aluminum shell seen in aircraft construction. This reduced the body weight by 27 to 63 kilos.

“This approach was very modern”, explains Dr. Werner Tietz, Director Body Engineering at Porsche in Weissach. “These days, our engineers still put a great deal of thought into how we can shed extra pounds in each new model generation.” The results can be seen in the consistently lightweight construction of the new Porsche Boxster1, an open two-seater with a mid-mounted engine, just like its ancestor. The latest generation weighs 40 kilos less than its predecessor, which was launched in 2004, despite meeting significantly higher safety standards. Alongside the lightweight body, the revamped engines also help to make the new Boxster particularly fuel-efficient. The technology behind it is the same as in its big brother, the Porsche 911 – it is half steel, half aluminum.

This construction, groundbreaking in the automotive industry, is based on the experience that each material has particular strengths. “Modern types of steel enable us to apply high levels of strength to very small areas”, explains Tietz. High-tensile steel, for example, is used for the windscreen frame to protect passengers if the vehicle rolls over. By contrast, aluminum is characterized by a low unit weight. The light metal can also be cast into extremely complex shapes. The new Boxster has a large aluminum element integrated into the rear side frame that is not only two kilos lighter than the steel version in its predecessor, but also replaces six individual components and thus the same number of steps in the production process.

Tietz and his team have long been working on the next vehicle generation. He wants to reduce body weight by a further 30 kilos, with magnesium playing a key role. “It’s just like on the racetrack – if you stand still, you get left behind.” 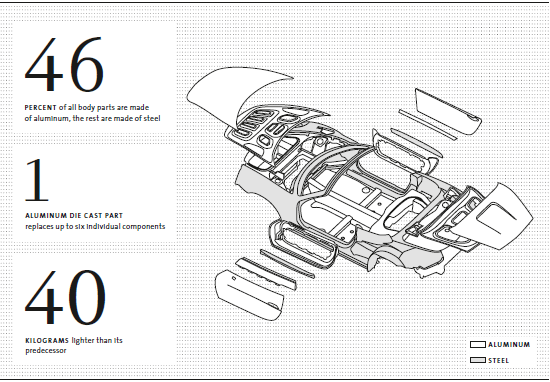