The VW Bus is not just a vehicle. It’s a cult object – a legend on four wheels. And it has returned to its origins. Since 1954, Volkswagen Buses have been built in Hanover: this is also where the VW Bus workshop is now putting the shine back into vintage vehicles – and a smile on their owners’ faces. 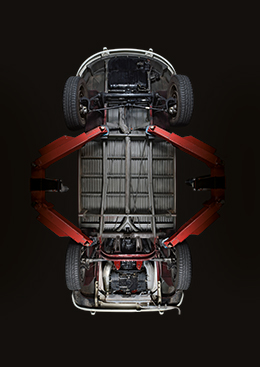 “A VW Bus restored in this way is as good as new and can be driven for another 40 to 50 years.” 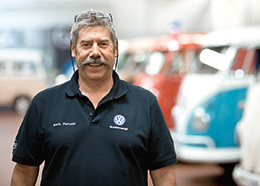 “It’s back to its spick-and-span self”, says a delighted Mario Petrusso. He runs his hand fondly over the shiny, polished Volkswagen emblem and the fine chrome headlamp rims of the 1950s vintage red and white VW Bus. The Volkswagen Commercial Vehicles workshop manager is adamant that visitors climb in and take a closer look at the interior with its cream seats and painted red dashboard. The T1 is so perfectly restored with original parts that it could have just rolled off the production line. “We put our heart into each and every detail of this car. We are all thrilled to see it here in the workshop, finished.”

T1? What sounds like an airport terminal is the official name of the first generation of VW Buses. It was launched over 60 years ago and rolled off the Hanover production line in its millions as a pick-up, delivery van and minibus from 1956. Now in its fifth generation, the all-rounder is today produced by Volkswagen Commercial Vehicles in Hanover.

Petrusso’s association with the VW Bus started in 1973 when he trained as a vehicle mechanic at Volkswagen. Exactly 35 years later, a separate classic vehicles division was established at Volkswagen Commercial Vehicles – in a way bringing the VW Bus back home. This was inspired not least by the first international VW Bus meet at the Hanover Expo grounds in 2007. Over 8,000 buses and more than 60,000 fans turned up – including British rock band The Who, whose hit “The Magic Bus” is a testament to guitarist Pete Townsend’s love of the VW Bus. The VW Bus was and is a cult object – there is no doubt about that.

These days, the experts in Hanover look after over 100 working vehicles from the T1 to the T4. Craftsmanship is what is needed. “In the early days, we recreated a lot of things because we didn’t have the original parts.” They even reconstructed a large bull bar by hand based on a drawing. Vehicles that will be fully restored are completely disassembled, acid-washed, re-paneled – with some panels fashioned by hand using a sheet metal press – immersed in a primer bath, sealed and powder-coated. An enormous amount of work. “A VW Bus restored in this way is as good as new and can be driven for another 40 to 50 years”, assures Petrusso.

The workshop team started by collecting and restoring the Group’s own classic vehicles. Since spring 2012, they have also been accepting the prized possessions of other VW Bus owners into their care. Today, customer orders come from as far away as Canada and Japan, closely followed by a shipping container with a VW Bus in need of restoration.

The workshop manager follows the progress of all of his charges carefully. “We photograph every step of the process. Every detail is documented”, explains the 55-year-old. When customers come to collect their vehicles, Petrusso presents them with comprehensive records detailing each step of the restoration process.

Petrusso walks through the rows of VW Buses in every color and design, past meters and meters of well-stocked shelves of spare parts. Volkswagen Classic Parts in Wolfsburg supplies the VW Bus workshop with original parts. “We had to search high and low for some parts.” Such as new frames for the opening front windscreen on a Type 1 Deluxe Microbus. Petrusso eventually found one with a VW Bus collector in the USA, who promised to visit Hanover in the near future.