The practical ŠKODA Fabia1 has won many hearts in the small car segment since it was launched over twelve years ago. Since 2009, it has also been a fixture in the international rally scene. At the motorsport workshop in Mladá Boleslav, the Fabia is being transformed into a high-performance machine.

Jan Kopecký’s face is alive with anticipation. On the hydraulic lift behind him, his “workhorse” for the coming year – a ŠKODA Fabia Super 2000 – is being primed for action. “You know, I always wanted to be a Formula One driver when I was a kid. I was successful enough, but the money just wasn’t there”, he recalls. In 2001, he tried his hand at driving a rally car for the first time: “After that, I never wanted to go back to racing on the circuit, going around the same bends again and again.” The Czech driver is currently paying a visit to the ŠKODA motorsport workshop, his tall frame allowing him to peer over the mechanics’ shoulders. Kopecký chats and jokes with the workshop team in a relaxed atmosphere.

A WINNING TEAM – 2012 was the
ŠKODA Team’s most successful year
to date –they won all the major
international rally events.

Although he is one of the most popular rally drivers in the Czech Republic, his feet have remained firmly on the ground. The races are held on closed-off tracks where spectators can get far closer to their favorite drivers than they can at traditional racetracks. The teams race against the clock and the tough track conditions. Faced with slippery tracks or rough gravel trails, rally drivers are forced to improvise at every turn. It is not uncommon for the top stars to cover up to 250 kilometers in time trials on a single weekend with just a few seconds between them when they cross the finishing line. Start crashes and spectacular overtaking maneuvers have no place in rally driving. Nonetheless, this rustic motorsport form is more popular than Formula One in many countries, including the Czech Republic. This is due in no small part to Jan Kopecký, whose career is inextricably linked with the ŠKODA brand. At the tender age of 22, he was the youngest national rally champion ever. Since 2008, Kopecký – now 31 years of age – has been the official test driver for the ŠKODA motorsport team. Motorsport has been a permanent fixture at ŠKODA ever since the brand’s earliest days – first on two wheels and then, since 1906, on four as well. By the 1930s, ŠKODA was already taking part in the legendary Monte Carlo Rally.

However, ŠKODA’s motorsport department also caters for the needs of customer teams. Over the past four years, the specialists at Mladá Boleslav have delivered more than 40 rally Fabias to customers with racing ambitions. In 2012, ŠKODA drivers were on the podium in 13 national championships, winning a total of six national titles in the Czech Republic, Germany and elsewhere. The life of a rally Fabia begins, just like that of any other ŠKODA, on the production line at Mladá Boleslav. However, a normal series-produced car would not be able to withstand the rigors of rally racing for more than a few kilometers. This means that rally models need to be strengthened and modified. The first step is to fit a stable roll cage to protect the driver and co-driver in the event of an accident. After that, it all comes down to technology. The special rally suspension was developed by ŠKODA engineers, as were many other individual components that transform the compact small car into an all-wheel drive super sports car. A number of parts, such as special brakes or lightweight components for rally cars, are sourced from specialist suppliers. 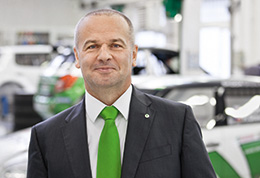 “In the rough-and-tumble of rally racing we learn a lot for our series production.”

Beneath the Super 2000’s bonnet, a modified two-liter four-valve engine packs a powerful punch with 203 kW (276 PS). The engine block and cylinder head are the same as in the production models. The rally Fabia’s doors and bonnet are made of ultra-light carbon fiber materials – as are the powerful wing extensions. However, in spite of its “chubby cheeks” and various aprons and spoilers, the sports racer is still instantly recognizable as a Fabia. “This is a deliberate move”, says Michal Hrabánek, who has been at the helm of the motorsport department since 2007, “after all, our racing cars are ambassadors for the ŠKODA brand”. Hrabánek has a team of some 80 people working under him. As he explains: “We have the highest expectations as regards the performance of our vehicles and the use of innovative technology, but also with regard to the cars’ robustness in the rough-and-tumble of rally racing. This allows us to learn a lot that we can take on board for our series production.” The motorsport head sought out specialists from Slovakia, Germany, Austria, Italy, France and the UK for his team. As he puts it: “To be successful in a globalized world, you need to think internationally.” Today, Juho Hänninen and his co-driver Mikko Markkula have arrived from Finland and are paying a flying visit to Mladá Boleslav. In September 2012, the duo won the European Rally Championship with a Fabia Super 2000. Hänninen is full of praise for the motorsport team: “In the last 50 rallies, I didn’t once drop out owing to a technical fault.” Hrabánek is also justly proud of his team of mechanics: “We see our work not only as a job, but also as a passion.” The mechanics travel all over the world with their teams, frequently spending more time on tour than at home.

At this point, all that is missing on Kopecký’s car are the wheel suspensions. The suspension screws are lined up neatly on the shelf like tin soldiers. Throughout the well-lit, friendly workshop, everything is in perfect order. In fact, the only clutter is to be found in the trophy cabinet, a problem that, as Hrábanek declares with a laugh, “gladdens my heart every day”.