From pioneer to market leader
in China

Since it first embarked on its economic reform and liberalization policy more than 30 years ago, China has become one of the world’s most important automotive markets and is now the Volkswagen Group’s largest sales market. With a share of 20.8 percent of the passenger car market and sales of 2.8 million vehicles in 2012, the Volkswagen Group is the market leader in China.

We laid the foundation for this success in 1984 by establishing the Shanghai-Volkswagen Automotive Company Ltd. (SVW) joint venture. The first model we produced in Shanghai was the Santana, which dominated the Chinese automotive market for many years. Thanks to the introduction of the ŠKODA brand in 2007 and the ten models now manufactured locally, SVW has so far produced more than eight million vehicles. The FAW-Volkswagen Automotive Company Ltd. (FAW-VW) joint venture was founded in Changchun in 1991. The first FAW-VW factory started production in 1993 with the Jetta. Production was expanded to include the Audi brand two years later and the factory today produces 10 models. More than six million vehicles have rolled off the FAW-VW production line to date.

To meet the constantly rising demand in China, we have now established 17 companies, including component, finance and sales companies. In 2004, we reached a significant milestone with the establishment of Volkswagen Group China, which coordinates and manages all of the Volkswagen Group’s activities in China. A “China” Board of Management function was created in 2012 to underpin the growing significance of the Chinese market.

At the end of the 1990s, the focus began to turn to diversifying the product range. A crucial factor here was the establishment of the import business in 2007, which we have since extended to include all of the Group’s passenger car brands. Our Chinese product portfolio now covers all segments from small cars to luxury sports cars. We took account of up-and-coming vehicle classes, such as the SUV segment, in our local production at an early stage. The commercial vehicle segment is also gaining in importance for us.

Our localization strategy is a key factor in our success in China: in addition to vehicles that are also sold elsewhere in the world, vehicles that have been specially modified for Chinese customers (with a long wheelbase, for example) and models developed exclusively for the Chinese markets are cornerstones of the business. We use state-of-the-art technology both on the product side, with innovative new generations of engines and gearboxes, and on the production side, with the latest vehicle and component plants.

We have had a strong presence in the northern and eastern coastal provinces from the outset, with our Shanghai and Changchun vehicle plants. Our “Go South” and “Go West” strategies were devised to increase our presence throughout the country, enhance the Volkswagen Group’s positive image in China and keep up with new regional growth trends. Specifically, these strategies include the construction of plants in Foshan, Ningbo and Urumqi, which is currently underway, and the significant expansion of the dealer network over the medium term. The “Go South” strategy has already led to a considerable increase in market share in the southern regions since 2008. The “Go West” strategy is designed to enable us to benefit from the growing importance of the inland regions. 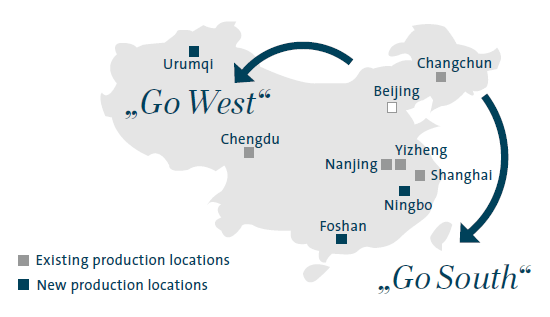 The Volkswagen Group’s extensive product portfolio, state-of-the-art technologies and plans for hybrid and electric vehicles mean it is ideally placed to meet future challenges, such as strict emission limits and restrictions on vehicle registrations in megacities, and to maintain a key position on the Chinese automotive market over the long term. The Chinese automotive market still offers great growth potential since average income is rising, urbanization is steadily progressing (around 130 cities in China already have more than a million inhabitants) and industrialization in the west of the country is also progressing continually. At present, there are only around 50 cars per 1,000 inhabitants; in Germany there are around 520. The genuine parts and used car business, as well as financial services in the automotive sector are also set to become much more important in China in future. The Volkswagen Group intends to maintain its leading role in these future markets as well through initiatives like “Das WeltAuto.” and by expanding its local financial services.