Revolution from the Toolkit

Significantly reducing the fuel consumption of our vehicles, producing them at globally competitive costs and simultaneously increasing profitability and productivity – these are the Volkswagen Group’s goals for its modular toolkits. They represent the further development of our platform and modular strategy, which has its origins in the mid–1990s. The latest member of our toolkit family is the Modular Transverse Toolkit (MQB). It is the basis for vehicles whose engine is mounted in a transverse arrangement. We introduced the first models based on this toolkit in the shape of the new Audi A3, the new Golf and the new SEAT Leon in 2012. Additional vehicles will follow in 2013.

MODULAR TOOLKITS IN THE VOLKSWAGEN GROUP 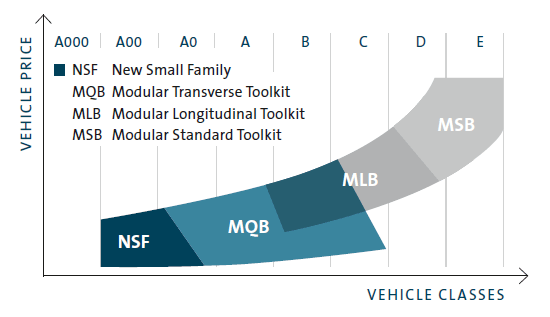 With the MQB, the Volkswagen Group’s modular toolkit strategy now extends from the A0 segment to the C segment. The vehicles in the New Small Family are also covered in the A00 segment. We intend to produce over 40 models based on the

MQB in the long term and across brands – to the highest quality standards, customized to each brand and tailored to the different market requirements. This will allow us to reduce vehicle weight and fuel consumption and to offer new technologies, for example from the Infotainment and assistance systems areas that have been reserved up to now for higher-level segments.

The MQB is inextricably linked with its counterpart in production: the Modular Production Toolkit (MPB). It covers the entire production process – from press shop to assembly – and sets standards for the manufacturing facilities. By installing the same components in facilities worldwide, we are able to make production more flexible than before with regard to volumes and vehicle types.

The MQB and the MPB put us in a position first to significantly cut both the necessary one-time expenses, such as development costs, and to reduce manufacturing times, and, second, to enable use over several vehicle generations. The toolkits also make it possible for us to produce different models in different quantities and even from different brands at one plant, in the same facility. This enables us to deploy our capacity more flexibly across the entire Group.

In addition to conventional petrol and diesel engines, the MQB also permits alternative drivetrains to be integrated, for example gas, hybrid, or electric drives. Previously, vehicle-specific adaptions were necessary in each case. The MQB has created an extremely flexible vehicle architecture that permits dimensions determined by the concept such as the wheelbase, track width, wheel size and seat position to be harmonized Group-wide and deployed variably. Other dimensions, for example the distance between the pedals and the middle of the front wheels, are always the same and guarantee a uniform system in the front of the car.

CORE ARCHITECTURE OF AN MQB VEHICLE 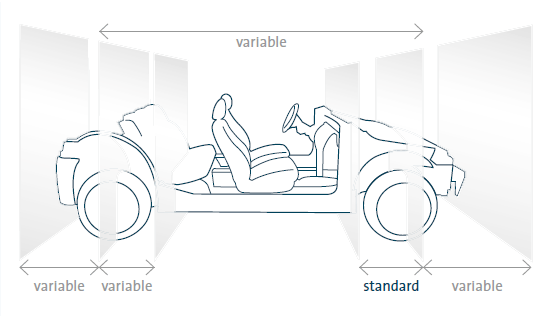 By integrating the Modular Petrol Engine System (MOB) and the Modular Diesel System (MDB) into the MQB strategy, we are able to demonstrate the substantial potential for reducing fuel consumption with conventional drivetrains. The two toolkits represent entirely revamped engine families. The new petrol engines, for instance, offer a series of technological innovations and also reduce weight and direct material costs. For example, active cylinder management (ACT) is being implemented for the first time in a four-cylinder series production engine, making it significantly more efficient. Because petrol and diesel engines are mounted at exactly the same angle, the exhaust line, drive shafts and transmission location can be standardized. This reduces the number of engine and transmission variations in the Group’s MQB system by nearly 90%.