Ten years of the Continental GT:
the twelve-cylinder bestseller

Following its return to profit in 2011, Bentley continued its positive performance in the reporting period. The Continental GT celebrated its ten-year anniversary; the Continental GT Speed was launched as the top-of-the-range model.

In fiscal year 2012, Bentley looked back on ten years of success for its Continental GT premium coupé. This was the first model that the luxury British brand developed as a member of the Volkswagen family. It also made Bentley the largest manufacturer of vehicles with twelve-cylinder engines. 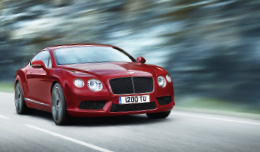 In the reporting period, Bentley launched an energy-efficient alternative to the twelve-cylinder version: the V8 engine. This was used in the new version of the Continental GT launched in 2010 and the Continental GTC that made its debut in 2011. The Continental GT Speed was relaunched as the series’ sporty top-of-the-range model and launched on the market in fiscal year 2012. Its top speed of 330 km/h makes it the fastest street-legal sports car ever built by Bentley. The brand also created waves in the reporting period with its Continental GT3 concept racer, which marks the brand’s return to the motorsport scene.

The Bentley brand increased deliveries to customers by 21.5% year-on-year to 8,510 vehicles, defending its position as one of the world’s leading producers of luxury vehicles.

The US market, which increased by 23.3%, remained Bentley’s largest market, closely followed by China with an increase of 23.5%. The brand also recorded strong demand in the Europe (+9.9%) and Middle East (+51.6%) regions.

Unit sales by the Bentley brand in fiscal year 2012 rose by 24.1% to 9,186 vehicles. The Continental GT and Mulsanne models were particularly successful.

The Bentley brand produced a total of 9,107 vehicles in the reporting period, a year-on-year increase of 19.9%.

The Bentley brand generated sales revenue of €1.5 billion in the period from January to December 2012, 29.9% more than in the previous year. Operating profit increased by €92 million to €100 million, with the higher volume and mix improvements having a positive impact. The operating return on sales increased to 6.9% (0.7%).