Most extensive product initiative in the company’s history

SEAT started an unparalleled product initiative in fiscal year 2012 with the goal of acquiring new customer groups for the Spanish brand. The third generation of the SEAT Leon was successfully launched on the market.

The SEAT brand started its largest product rollout to date at the beginning of 2012 with the revamped Ibiza. The four-door version of the Mii also made its debut. The successful Toledo was back in the vehicle range after a three-year break. The unveiling of the new Leon marked the first time that SEAT’s new design language was applied to a series model. The Leon is the brand’s first vehicle to be based on the

Modular Transverse Toolkit and introduces equipment features from the premium class into the compact segment for the first time. In 2013, SEAT will expand the Leon series to include a three-door version and an estate version. In addition, the new Ibiza Cupra will be launched on the market. 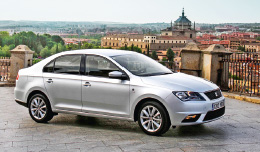 The SEAT brand delivered 321 thousand vehicles to customers in fiscal year 2012, down 8.3% on the prior-year figure. The brand was hard hit by the difficult market conditions in Western and Southern Europe. The markets in Spain, Italy and France in particular saw significant declines in demand as against 2011. By contrast, the markets in Germany, the United Kingdom and Mexico recorded encouraging increases.

In the reporting period, the SEAT brand sold 429 thousand vehicles, 18.8% more than in the previous year. This includes the Q3 manufactured for Audi.

The SEAT brand produced 321 thousand units in the reporting period, a decline of 9.0% year-on-year.

At €6.5 billion, the sales revenue generated by the SEAT brand in fiscal 2012 was 20.2% higher than in the prior year. The operating loss narrowed from €–225 million to €–156 million; the operating return on sales was –2.4% (–4.2%). Earnings were positively impacted by cost cutting and the increased volume – due to the inclusion of the Q3 produced for Audi – as well as exchange rate effects, while the continued sharp fall in demand on the domestic Spanish passenger car market had a negative effect.