Fiscal year 2012 was another record year for the Volkswagen Group in its largest market: China. With 2.8 million vehicles sold, growth by our joint ventures significantly outperformed the Chinese passenger car market as a whole. Measures have been taken to further increase capacity.

Volkswagen has been cooperating with its partners in the Chinese automotive market for around 29 years. The Group now has twelve vehicle production facilities or component sites in China. The Shanghai-Volkswagen joint venture and the joint venture between FAW (First Automotive Works) and Volkswagen in Changchun are accounted for using the equity method in the consolidated financial statements. 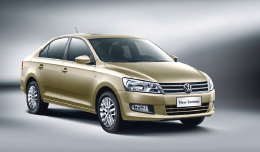 In addition to established Group models and models that have been modified for the Chinese market (with a longer wheelbase, for example), vehicles specially designed for Chinese customers are also produced; examples of these include the Volkswagen Lavida, New Bora and Santana models. The new Santana celebrated its world premiere in the past fiscal year; its predecessor was one of the most successful models in China, with almost 4 million units sold. The new Lavida and Bora were also launched in the reporting period and were well received by the market. At 2.8 million vehicles, the Volkswagen Group delivered 24.6% more cars in China in fiscal year 2012 than in the prior-year period. The Volkswagen Passenger Cars brand recorded a 24.8% increase in the Chinese market, selling 2.2 million vehicles. The Audi brand generated growth of 29.6% and the ŠKODA brand 7.1%. The Magotan, Jetta, New Bora, Tiguan, Sagitar, New Passat, ŠKODA Octavia, Audi A6 and Audi Q5 models were particularly popular with Chinese customers. The Volkswagen Group lifted its market share from 18.2% in the previous year to 20.8% at the end of 2012, thereby extending its leadership of the Chinese market.

INCREASE IN DELIVERIES TO CUSTOMERS

The joint ventures produced a total of 2.6 million vehicles in fiscal year 2012, a year-on-year increase of 20.0%. A new vehicle plant in Yizheng with an annual capacity of 300,000 vehicles was opened in the reporting period. In addition, a decision was taken to construct additional production facilities in Ningbo and Urumqi. The new vehicle plants in Foshan and Urumqi will start production in 2013. The goal is to increase Volkswagen’s annual capacity in China to four million vehicles by 2018. The Group is expected to invest a total of around €9.8 billion in new production facilities and products in China in the period up to and including 2015. These initiatives will be financed entirely by cash flows from the Chinese joint ventures.

The joint ventures generated an operating profit (proportionate) of €3.7 billion in fiscal year 2012, an increase of €1.1 billion on the prior-year figure. The rise is due to volume and mix improvements, positive exchange rate effects and savings gained from lower material costs.

The joint venture companies in China are accounted for using the equity method. Their figures are not included in the Group’s operating profit. Their profits are included solely in the Group’s financial result on a proportionate basis.