Brazil is Latin America’s “economic wonderland”. It ranks as one of the countries with the most promising growth potential and has jumped to sixth place among the world’s largest economies. Volkswagen do Brasil is one of the driving forces behind this trend. The company is celebrating its 60th anniversary in 2013 – and has its eyes focused firmly on the future.

The 168-meter “Edifício Itália” office complex at the throbbing heart of São Paulo offers one of the most fascinating views of the city. Head to the skyscraper’s bar, 150 meters above the ground, late in the afternoon to squint into the setting sun. A seemingly endless sea of high-rise buildings stretches to the horizon. The São Paulo region is home to around 20 million people.

“Trends catch on quickly here. Brazilians are always up for something new and exciting.” 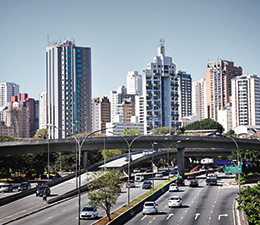 There are over 1,000 companies with German roots in Latin America’s largest industrial area, making São Paulo the biggest “German” industrial city abroad. At the same time, São Paulo is one of the Volkswagen Group’s oldest and most promising locations. Today, around 24,000 people work in Volkswagen’s four Brazilian plants. They produce 3,500 vehicles and 3,800 engines every day and currently sell 22 models, including the Gol, Voyage, Fox, Polo, Polo Sedan, Saveiro, Golf and the SpaceFox. “As the driving force behind the Brazilian automotive industry, our roots here run deep”, said Prof. Dr. Martin Winterkorn, Chairman of the Board of Management of Volkswagen AG, at the 2012 São Paulo Motor Show. In 2013, Volkswagen do Brasil is celebrating its 60th anniversary and the production of over 20 million vehicles in Brazil. The anniversary is first and foremost a forward-looking event for the Volkswagen Group – by the end of 2016, the Company will have invested around €3 billion in expanding production capacity and developing new vehicles in Brazil.

The Volkswagen Gol – or “goal” in English – has accumulated an enormous fan base over 26 years and is Brazil’s best-selling car. The VW Beetle, or “Fusca”, previously held this position for over 24 years. This is why Volkswagen is seen as a local brand. Volkswagen do Brasil President Thomas Schmall describes this phenomenon with a twinkle in his eye: “Somewhere along the line, Brazilians were astonished to discover that the Beetle is also produced outside of Brazil.” Conversely, Europeans are often surprised to learn that the Group also leads the truck market in Brazil.

Congressman and former president of the Brazilian central bank Henrique Meirelles testifies to the Brazilian economy’s “high local demand”. The country is rich in minerals and renewable resources such as sugar cane, which is used to produce ethanol, a widely-used fuel in Brazil. “Ten years ago, the Brazilian middle class numbered 66 million. This will have grown to 118 million in 2014 – or two-thirds of the total population. That creates stability and purchasing power”, explains economic expert Meirelles. “In a long-term context, the Brazilian market for passenger cars and light commercial vehicles could grow to over 5 million units per year.”

“Our typical customer is 40 years old and married with two children”, says Hans J. Voswinkel from Grupo Servopa, one of the largest and oldest Volkswagen dealers in Brazil, based in the state of Paraná in the south. Grupo Servopa has sold over 200,000 Volkswagen vehicles since joining forces with the German carmaker in 1955. He knows what his customers want: “Trends catch on quickly here. Brazilians are always up for something new and exciting.” 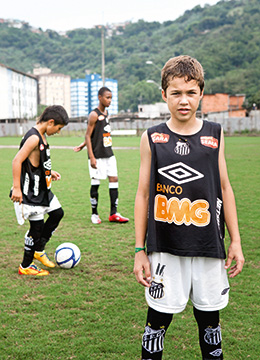 VOLKSWAGEN SUPPORTS THE UP-AND-COMING FOOTBALLERS AT FC SANTOS – A good education is always part of the game plan for the most talented players.

Grupo Servopa’s youngest branch was built in Curitiba, the capital of Paraná, to the highest environmental standards. Voswinkel is applying for strict LEED certification from the USA (“Leadership in Energy and Environmental Design”) – the first company in Brazil to do so. The Brazilian with German roots believes that “if you want to stay ahead in the future, you have to be a leader in environmental protection, too”.

Volkswagen do Brasil is considered a pioneer in environmental protection and resource conservation, not least because it introduced flex fuel technology to the market in 2003. Renewable energies are a priority – Volkswagen will generate 40 percent of its future energy needs with its own hydroelectric plants. The line between environmental and social projects is often thin.

Visitors to the Anchieta plant are intrigued by the enormous hand-operated flywheel on display – a simple water pump that does great good. It gives thousands of people in dry regions access to free, clean water. The Brazilian foundation “Fundação Volkswagen” also supports a wide range of social and educational projects and has invested almost €20 million in the last ten years alone.

Anyone involved in the community in Brazil cannot ignore soccer – the country is set to host the 2014 World Cup. Volkswagen will be on board as the partner of the Brazilian national soccer team, “Seleção Brasileira”. The automobile manufacturer already supports social projects such as “A chance to play”, as well as the work with young people that takes place at the soccer club in Santos – a port city in the Brazilian state of São Paulo. FC Santos is famous. Pelé started his career here, as did Neymar. The 21- year-old is already a superstar and is considered the next Pelé. 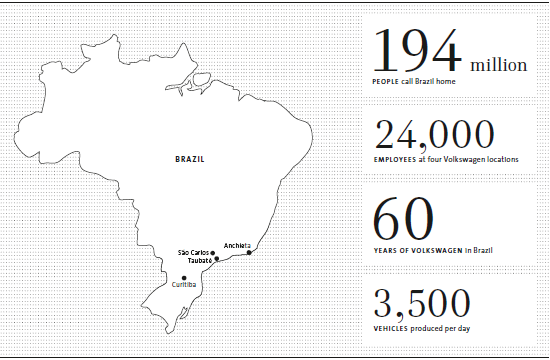 “For millions of people, making it big in soccer is the great Brazilian dream”, says Bruno Amodio from FC Santos. A good education is always part of the game plan for the most talented players. Even today, going to school is still not a given for many Brazilian children. The weather doesn’t help, either – in the rainy season, school buses often get stuck in the mud. Following a government tender, thousands of all-terrain “Ônibus Escolar” are now in service all around the country – developed and produced by Volkswagen.