In the world’s first Audi City in London, the brand with the four rings is showcasing its entire range of models using virtual technology – something that has never been done before. At the same time, customer relationship managers like Michelle Mensah provide a one-to-one service for visitors. A look at Audi’s first digital showroom.

POWERWALLS extend along almost the entire length
of the digital showroom

HIGH-PERFORMANCE COMPUTERS visualize each
of the 36 Audi models on a 1:1 scale – in all variants

With a swipe of her finger, Vanessa Simeonidis switches off the virtual engine and takes another close look at the all-black leather trim. “Yes, that’s the way I want it”, she nods contentedly. The customer, an insurance lawyer by profession, has opted for a sporty, elegant exterior with ibis white bodywork and silver aluminum rims. Even though her new Audi A31 has yet to be built, she has already examined it from all angles, inside and out. The images are projected onto a floor-to-ceiling multimedia screen in the world’s first Audi City, which opened in summer 2012 near London’s world-famous Piccadilly Circus. 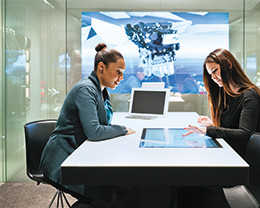 “Ideally, I will cater for the needs of my customers for the entire lifetime of their Audi.”

Seventeen high-performance computers visualize the Audi model on a 1:1 scale, just as it was configured by Vanessa Simeonidis on one of the seven multitouch tables in the showroom. Thanks to the two million pixels in the LED projection screens, every single interior detail looks exactly as if she were actually sitting behind the wheel of her future car. The sound of the engine from the 90-speaker surround system is impressively authentic, as is the satisfying sound that the door makes when Vanessa Simeonidis swipes it shut.

Four of these large-format screens – known as powerwalls – extend along almost the entire length of the Audi City showroom, which measures 420 square meters in size. All colors, equipment lines and options for Audi’s current range of 40 or so models can be displayed here and mixed and matched at will. This means that, depending on customers’ preferences, there are several hundred million configuration possibilities. Now, for the first time ever, it is possible for an automobile manufacturer to bring the entire diversity of its product range to life in a single showroom. A handful of real exhibits bridge the gap between virtual models and physical driving pleasure.
Although the carmaker is breaking new ground with the high-tech concept behind Audi City, it is by no means the only innovation here. Michelle Mensah’s role at London’s Audi City – as a customer relationship manager – is also a whole new departure. Although she has just helped Vanessa Simeonidis to configure her dream car, her job extends well beyond advising customers and organizing test drives. She will also remain the customer’s personal contact – for example, it is Michelle that Vanessa Simeonidis will contact when she wants to bring her Audi A3 in for servicing. The young Briton describes her varied role as follows: “Ideally, I will cater for the needs of my customers for the entire lifetime of their Audi.” 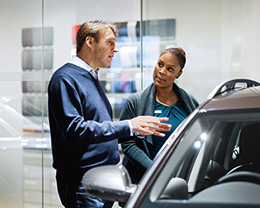 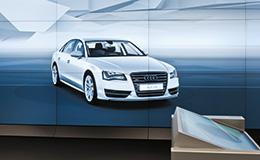 This special approach to customer management is also a welcome development for David Parker, a 45-year-old management consultant who recently took delivery of his new Audi Q52 at Audi City and ordered a new A13 to boot. He did not even feel the need to take a test drive: “The powerwall visualization and Michelle’s advice were enough for me. Besides, Audi and I go back a long way and I have great faith in the brand.”

Modern communications technology such as that used in Audi’s new venture in London is becoming a firm fixture in the lives of more and more people. Nine out of ten customers who are interested in buying a new car consult the Internet for information beforehand. Similarly, two out of three use social networks to draw on the experiences of others in their decision-making process. Inevitably, this has not left dealers unscathed: ten years ago, customers still paid an average of seven visits or so to the dealer before signing the purchase agreement; these days, the average number of visits is just two. “Web technologies are a part of our customers’ everyday lives. That is something we will be reflecting more and more in our brand profile in future”, confirms Sven Schuwirth, Head of Brand and Sales Development.

Trends such as these are emerging fast, particularly in booming cities like the UK capital. This, as Schuwirth explains, is why Audi “aims to promote real interaction with our customers at such locations”. There will be plenty of opportunities to do so in future: at exhibitions, lectures and discussions on topics from the realms of art, architecture and social issues.

“Networking” is the watchword. It is no coincidence that transport hub Green Park was chosen as the location for Audi City – after all, six bus and three Underground lines converge here, while Piccadilly Circus is just one stop away. As marketing and sales expert Sven Schuwirth explains: “Here we can come into contact with people in their everyday environment – on their way to the office, picking up a few groceries after work, or going shopping at the weekend.” Right across the road is the famous Ritz Hotel with its international guests. “Around a thousand existing and potential customers visit us on average every week”, reports Michelle Mensah. Her sales manager is also very happy: nine out of ten Audi City customers are buying an Audi model for the first time.

The London venture is just the beginning of a new era of virtual showrooms. At the end of January 2013, the second one opened its doors in Beijing – inviting Chinese customers to a rendezvous in cyberspace.