A new face on the streets of Berlin doesn’t usually attract much attention. Locals go about their business or soak up the autumn sun in a sidewalk café. But the new, bright red Golf turns heads as it waits for an important date. Can the car win over young urbanites?

“It drives really well. It’s as though I’ve been here behind the wheel forever.” 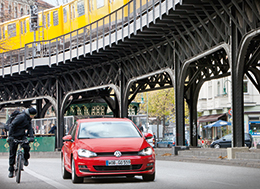 Driving in a major city? Isn’t it better to take public transport? Do young urbanites even need a car? You can have a preconceived opinion – or you can simply check it out for yourself. Five young Berliners test the seventh generation of the Volkswagen Golf1 for city-friendliness ahead of its market launch.

Agata has taken the morning off for her first encounter with the new Golf. The industrial engineer is currently studying for her master’s degree in energy technology and wants to find out more about Wolfsburg’s latest. The car and the student meet for the first time under the Gleisdreieck railway bridge. Agata casts a critical eye over the vehicle. She gets in and starts by asking what exactly is new in the Golf VII: adaptive cruise control, the city emergency braking function, a parking and lane-keeping assistant, as well as road sign and fatigue detection.

Her professional interest in resource conservation and sustainable mobility is piqued as talk turns to fuel consumption. The Golf has never been more efficient, with consumption and emissions reduced by up to 23 percent compared with its predecessor. A large part of this is due to its intelligent lightweight construction – it weighs in at up to 100 kilos lighter than the previous model. Her boyfriend’s VW Bus, which is over 20 years old, cannot keep up with that. While the classic vehicle with a rear-mounted engine has won a place in her heart, she dreams of a first-generation VW Bus, “the one with the split front windscreen”. Ideally to travel the world in. 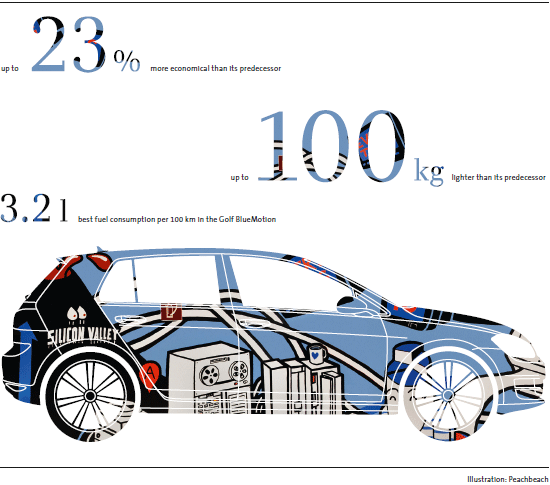 The blonde student chats about more travel plans as she drives around in the new Golf. “It drives really well”, she says suddenly, after a short pause. “It’s as though I’ve been here behind the wheel forever.” She skillfully navigates past double-parked vans, cyclists and Berlin’s ever-present roadworks. Agata has just switched to “sport” mode, one of five driving modes that determine handling characteristics and steering, among other things. “I would usually stick with the eco program in the city, but this is a test drive after all, isn’t it?” She laughs and glances at the fuel gauge, just to be sure. The 1.6 liter turbodiesel engine (105 PS/77 kW) consumes an average of 3.8 liters of fuel per 100 kilometers2. That will take you far on the streets of Berlin.

At the next red light, she runs her hand over the dashboard and the fine stitching on the leather steering wheel. “It feels great.” As she gets out, Agata turns around, leans over the top of the car and asks about the TDI engine’s emission levels. “Only 99 grams per kilometer?”

“Plenty of space behind the steering wheel. And the seat is nowhere near as far back as it can go.” 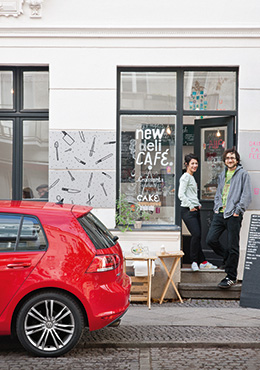 Max grins. He has found the impossible – a parking space in Friedrichshain-Kreuzberg. This “Kiez”, as Berliners call their part of town, is particularly popular among young people. Max opens the back of his VW Lupo to unload. The compact vehicle is perfect for downtown Berlin, but not quite so perfect when Max is out and about with his girlfriend and child. “Then space gets a bit tight.”

Max knows from experience that the Golf traditionally has plenty of room. His first car was a 73 Passat, followed by a Golf II and Golf III. Max needs a car with space, and not just for personal use. For the last two years, the qualified architect has run a café called “New Deli Yoga” together with Maria, a yoga teacher from Cologne with Greek roots. He parks the red Golf in front of the café.

Both of them immediately start inspecting the new model’s load capacity. After all, the Golf VII offers 30 liters more interior storage space than its predecessor, with a capacity of 380 liters behind the back seats. At the same time, the exterior dimensions have remained almost exactly the same – a real plus in city traffic. “The loading space is as flat as a pancake”, says Max. He folds the back seats down and starts stacking empty plastic crates into the car. Maria sits on the sill. “It’s so low even I can lift boxes over it without a problem.”

Max heads off towards the wholesale market: “Plenty of space behind the steering wheel. And the seat is nowhere near as far back as it can go.” On the road, Max tells of his café and everyday life in Kreuzberg. He is aware of the problems and does a great deal for his district. Maria and Max introduced “social rates” at their café. This means that those with not much money pay a little less at “New Deli Yoga”.

“Street art is to Berlin what bread rolls are to a bakery.” 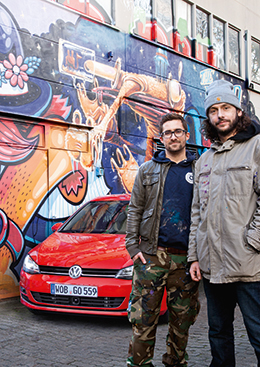 Young creative types are increasingly being drawn to the neighboring district of Neukölln as a result of the boom in Kreuzberg over the past few years. This is where the red Golf is now headed, to today’s third and last destination. As the door is opened, the aroma of ground coffee which still lingered after the visit to the wholesale market gives way to the smell of fresh paint. “Peachbeach” – as the artist duo Attila and Lars call themselves – are hard at work. The two met while studying graphic design and decided to create street art together. “Street art is to Berlin what bread rolls are to a bakery”, explains Attila. The city on the Spree River is considered the center of street art culture, which is globally linked via the Internet. “Peachbeach” are professionals. Their work has been featured at exhibitions in Vienna, Amsterdam, Paris and London. They are in demand as illustrators and demonstrate their talents at live painting events.

The Golf VII parks in front of the nearly finished wall mural and appears to blend in with the image. The Golf effortlessly passes muster with the young design professionals. “Genius”, says Lars. “The Golf is a Golf is a Golf. You have to first come up with such a timeless design.”

Lars is impatient to get in; he rode to the test drive on his bicycle. “I’m a bit cold. Does the Golf have heated seats?” It does. Inside, Attila immediately checks out the infotainment system. The large touchscreen works together with a proximity sensor and switches from display to operating mode without having to be touched. Attila plugs in his smartphone, flips through the CD covers in the multimedia library and scrolls through his playlists. His verdict? “Cool touchscreen technology.” Everything else he says is drowned out by the 400 watt sound system. He then drives around the block, the bright-as-day rays of the xenon headlights illuminating the houses. Night comes early on this fall day in the German capital city.

One thing is clear from these three encounters between young urbanites and the new Golf: cars and cities certainly do go together. But young people don’t just want a safe vehicle that is easy on resources but still fun to drive – they also want plenty of interior space and exterior dimensions that are as compact as possible. And the onboard infotainment has to be as intuitive and easy to use as a smartphone. The new Golf ticks all the boxes. It is a compelling car – in any situation.