Abu Dhabi is the site of the first solar thermal power plant ever to be built on the Arabian Peninsula. In the near future, the facility is expected to produce electricity for more than 20,000 households – environmentally friendly energy courtesy of the sun. The heart of the operation: a MAN steam turbine.

We are just outside the small town of Madinat Zayed. It would be 55 degrees in the shade if there were anything to offer shade – but there are no buildings or trees for miles around and not a cloud in the sky. Ideal conditions for harnessing the sun’s energy. Here, 150 kilometers southeast of Abu Dhabi, the sun shines with full force for more than 3,000 hours a year, compared with 900 to 1,100 in the various regions of Germany.

“The market for solar thermal energy is extremely promising. We have already secured a large number of orders in this area.” 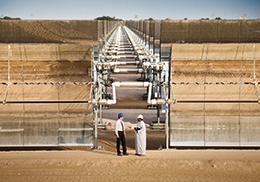 Anyone who thinks that solar cells are being used here in the desert should stop and think again. The “Shams” power plant (Arabic for “sun”) uses an innovative technology called solar thermal energy, which is ideal for regions with intense sunshine. The sun’s rays are captured using mirrors and – like a magnifying glass – focused on a single point, which heats up to a high temperature. A total of 260,000 of these half-cylinder mirrors are used in the Shams plant, where they are spread over an area measuring two square kilometers. Glass tubes are positioned at the exact burning point of the mirrors; these are filled with a special oil that is heated to almost 400 degrees by the sun’s rays. The oil flows through a heat exchanger in which specially prepared water is vaporized. This steam then expands in a turbine to two thousand times its original volume and drives the turbine – a similar process to the one used in coal power plants.

In the middle of the desert, the turbine – as tall as two men and longer than a heavy duty truck – generates electricity for 20,000 households. The turbine comes from Germany, from the MAN Diesel & Turbo plant in Oberhausen. Although MAN is known first and foremost as a manufacturer of commercial vehicles, large-bore diesel engines for ships or power plants and compressors and turbines account for around 20 percent of its sales revenue worldwide. “Solar thermal power plants are just one of many different ways in which turbomachinery can be used”, explains Thomas Witt, who is in charge of large-scale customer projects at MAN. “The market for solar thermal energy is extremely promising. We have already secured a large number of orders in this area. Several facilities we worked on have already gone into operation – in Spain, for example.” Every year, as part of its broad product range, the company sells between 30 and 40 of these machines – each of which costs several million euros – for generating electricity and also for use as mechanical drives in large compressors, etc.

MAN turbines are custom-built for each application and are based on a modular system. The turbine is the core of the power plant and must be adapted exactly to the plant’s flow conditions. For instance, the design of the steam-driven paddles must be calculated separately for each individual machine. In the case of the Shams power plant, a special insulation layer was also required. This is because it is extremely cold in the Arabian desert at night, when the turbine is not in operation; without heat insulation, the turbine would take too long to reach the required temperature when it goes into operation again in the morning. In the case of large turbines, it can take several months from ordering to shipping. For project manager Thomas Witt, supplying the product itself is only part of the work – he also oversees the transport, on-site installation and the commissioning process. The first tests are scheduled to take place in spring 2013. If all goes according to plan, the power plant will save 175,000 tonnes of carbon dioxide every year. And then Thomas Witt will have to bid adieu to his “baby”, as he affectionately calls his turbine. However, with new orders coming in not just from the Arab region, but also from China, India, South Africa and other sun-baked regions, that is something that he will just have to get used to. 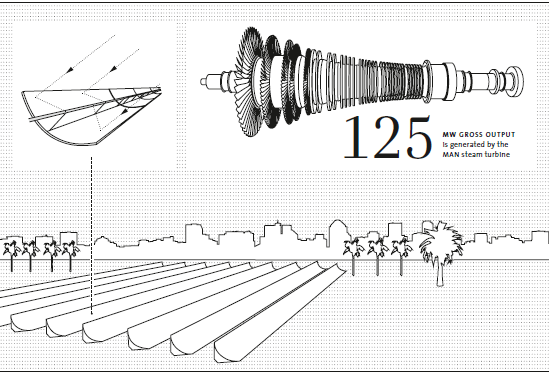